From microchipped players to muting your fantasy foes, this is a big year for the NFL app.

Back when the Xbox One first debuted, Microsoft heavily pushed its new console as the ultimate NFL device. It was a smart idea, as the National Football League is America’s most-viewed sport by a large margin, but we haven’t heard much about the NFL on Xbox One as of late. That’s likely due to the games-first tack Microsoft has adopted since, but the developers at NFL and Microsoft haven’t forgotten about Xbox’s biggest sports app: game-changing updates are on their way. 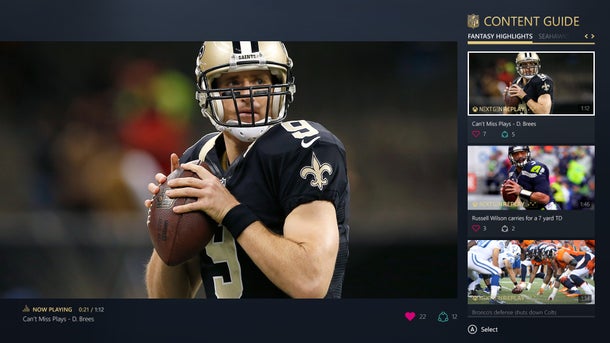 The biggest new upgrade involves data pulled from micro-chipped players (hopefully the tech is in their uniforms and not under their skin)—or as Microsoft and the NFL are calling it, “Next-Gen Stats.” Thanks to those chips, the location and speed of every single player is being monitored, and can be used in some pretty amazing ways. During a demo of “Next-Gen Replay,” I watched an instant replay on the upper-right hand of the screen shown in sync with moving icons representing each player. (It was very reminiscent of Doom’s map moving simultaneously with the first-person lead.) When a wide receiver cut right on his route to get in position for a catch, so did the icon. When the replay restarted, the icons on the football field display did, too. 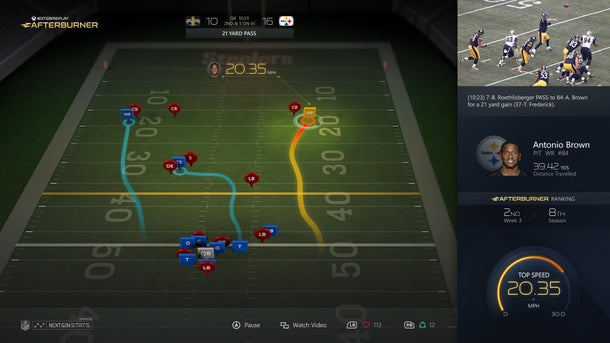 Next-Gen Stats is about more than moving icons, though. Another simulation tracked the moving speed of some receivers all breaking past scrimmage into the field; it kept the speeds of each player displayed and noted when a receiver hit his top speed for the play. This tech will be a major part of a meta-game called “NGS Pick’em,” in which NFL on Xbox One users will take part in a multiple-choice prediction contest every week. If you pick, say, the fastest runner in a group, you earn points that are tracked the entire season. On a weekly basis, Microsoft and NFL will give out memorabilia like signed helmets, but the season winner will get tickets to the Super Bowl—so it’s worth your while to return every week.

Tech on the field will be getting an update, too. The Surface tablets used by coaches and players will get an upgrade that’ll deliver even more info to the sidelines—larger-yet-lighter tablets will show more photos while improved markup capabilities include multiple pen colors and a whiteboard option. But even with this upgrade, fans will see Next-Gen Stats’ impressive data first due to its real-time functionality. 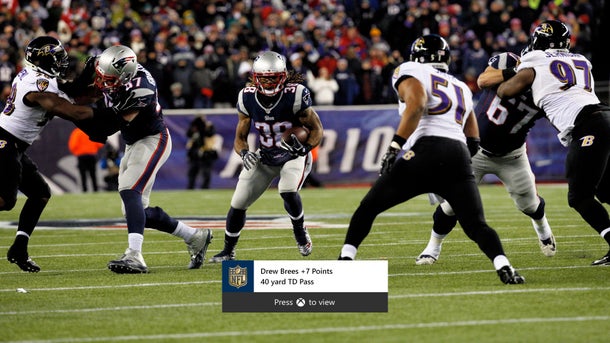 Significantly less sexy (but appreciated nonetheless) is the improvement to the NFL on Xbox One’s notification system. If you mark specific games ahead of time, the app will remind you that they’re starting when you’re watching (or playing) something different at the time. If one of your opponents in the many fantasy leagues incorporated into the NFL app (which added Yahoo’s industry-leading service during last season) earns points, you’ll get a heads-up, with the ability to see the play that produced the change. And if you’re a multi-league player (if you’re reading this, you likely are), you can filter notifications so only your biggest competition pops up.

Microsoft and the NFL plan to roll out the upgrades to the NFL app later this month, just in time for fantasy drafts, but the big question is if these features are ready for regular season use. While I was impressed with the demo of Next-Gen Stats, what I saw wasn’t based on live games. Fortunately, we won’t have to wait long to see if this impressive tech will deliver during game time.

How to Get Free Xbox One Copies of Gears of War 2, 3, and Judgment